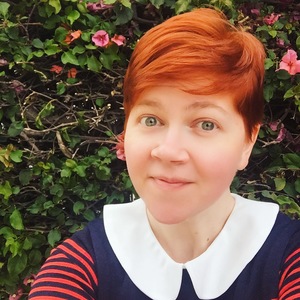 Hi! I'm Jen Krueger and I've been doing improv since 2009. I was the Artistic Director of the LA Indie Improv Festival (LAIIF), and a founder/host of The Manifesto Show for its 5 years on the indie scene. I've trained and performed with Ian Roberts, Alex Berg, Eugene Cordero, Alex Fernie, Will Hines, Drew DiFonzo Marks, and more.

At UCB, you can see me perform with Copycat, a group that invites guest teams like Cook County Social Club and Toledo Rep to perform, and then attempts to do the exact same set without judgment or commentary. I was also on the Mess Hall team Chillbot, and have been part of many experimental and immersive UCB shows over the years.

I'm also on indie teams Argo Navis, Bad At Parties, and Podprov (an improvised podcast), and have experimented with form in many capacities. My indie 2-person team Penguins on the Playground has been together and performing at venues around LA for more than 7 years (but no matter what Dave tells you, we're not dating). I also spent 2 years with Doctor Who Live!, which did an improvised episode of Doctor Who twice monthly on the iO West mainstage and at conventions across the country.

When it comes to coaching, my goal is for you to grow as a performer and have fun, so I'll tailor our sessions to whatever your group needs to achieve this.

Not a performance group? That's cool! I coach practice groups too.

I use the standard coaching rate and cancellation policy, and I also have space available to meet in at no extra charge if your group doesn't have a convenient/large enough place to rehearse!